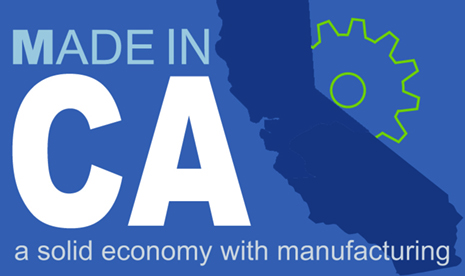 Even if you’ve never been to California—but certainly if you live and work here—you might have noticed our state’s tremendous pride in its industries. Of course, we are well known for our entertainment industries for obvious reasons, and famous national campaigns to promote our nation-leading agriculture industry (e.g., commercials for the California Raisins, the California “Happy Cows”) have definitely instilled the Golden State’s productivity in the minds of millions.

Likewise, many have heard about the impressive scale of California’s economy. In fact, according to Forbes, “if it were a country, California’s $2.46 trillion economy would be the sixth biggest in the world behind the United Kingdom.” But what might not be as commonly known—even for Californians—is our state’s leadership in manufacturing—including medical device manufacturing.

According to Bloomberg View, “No state comes close to California in manufacturing”—which, according to Area Development, manufacturers employ more than 1.2 million people in California, which accounts for almost 9 percent of the work force.

Along with California being a leader for manufacturing in general, it also leads in medical device manufacturing. According to QMed:

“…the state is still unparalleled when it comes to sheer size, boasting more medical device companies and workers—by far—than any other. The state’s device industry is considerably bigger than that of Minnesota and Massachusetts.”

We definitely appreciated QMed’s nod to our region’s contributions, which included mentioning how “Orange County has long been one of the biggest medical device clusters in the country.”

However, we do feel that there’s more to the sunny picture of California manufacturing than there may seem—particularly regarding how much our medical device design and development services (especially with the surging demand for wearable medical devices) play roles in the medical products we manufacture. This is due to two highly related areas in which California is also a national leader:

In short, the boost California VCs give innovators to get patents and seek partners to bring their new medical devices “from concept to commercialization” is a huge reason why our California medical device manufacturers lead the nation.

These are some of the reasons why DeviceLab is delighted to have been asked to join the California Manufacturing Technology Consulting’s “Made in California” program. As a California medical device manufacturer, we are proud to support the program and be a small part of why our state is a leader in this context.